OUT OF STOCK - ETA TO SHIP BY WEEK OF AUG 3rd

The TS Comfort Plus Series is your best bet if you are hunting for the most comfortable chair on the market. The TS 61 Purple and black gaming seat will provide you with maximum comfort and a sleek ergonomic design with a build-in full-back lumbar support. Inspired by our passion for improving every aspect of your gaming experience, this chair series is regarded as the best choice for comfortably prolonging your gaming hours. Take your gaming setup top the next level while supporting a great cause!

I’ve gone to C2E2 for the last few years, and I always saw TS promoting their products. I’ve been gaming off and on for as long as I could remember, and I started working from home since March. Honestly this chair has made working from home and gaming sooooooo much better! It’s comfortable without letting me feel like I’ve sunk into the chair, and haven’t had any trust issues...the ones where you think “huh, I think I might fall backwards outta this chair for reclining too much for too long.” Best investment I’ve done all year, my back, my work, my gaming, and I thank you!

So far I’m loving the chair. Only thing I wasn’t happy with was the FedEx shipping. It was in my state for almost a week before they delivered it. If I were to say anything negative about the chair is that the armrests are way too low and I wish the chair would go lower but I ordered the other armrests so that’ll fix it (granted for an almost $400 chair I shouldn’t have to spend another $40 to get new armrests, but it’s whatever. Overall this chair is so comfortable and I can’t wait for the new armrests to arrive!

Took me maybe 20-25 minutes to put together the best chair ever. Very awesome selection to choose from. Will be getting one for my wife as well!! 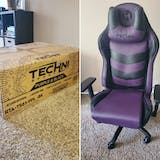 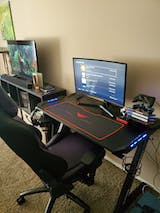 If you have been dreaming of a white gaming chair, the TS Kawaii Colors Gaming Chair will bring that dream to life! Famous for its unique design, comfort, and multi-point back support, our Game Master Series will undoubtedly improve your sitting forever. As one of our best sellers, the Kawaii gaming chair will indeed WOW your gaming community. Add this unique touch to your gaming setup with a product that supports a great cause!

it's perfect, my favorite colors and more comfortable than i expected. i love the holographic outline. 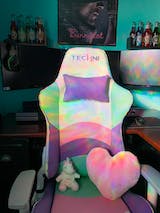 The Kawaii Colors Gaming Chair is amazing! Cute, Functional, Colorful, Comfy, and in exactly what I wanted. Only thing that I had issues with was putting it together by myself, it would be super helpful to have another set of hands when trying to install the back rest. But that is not a fault of the chair, that just simple physics, so get another person to help you! Other than that the instructions on setup where simple to follow, and it came with spare pieces just in case! 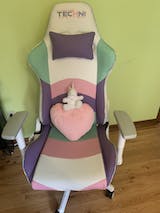 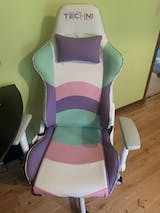 ITS GREAT BUY THAT SHHHHHH 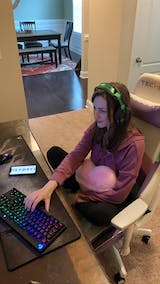 Shipping was a little slow but not too bad considering the world is basically ending. Anyway, this chair is suuuuper nice and high quality. It’s perfect! 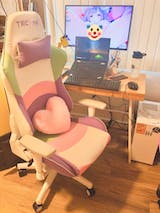 Unleash your ultimate gaming experience with the Stryker Gaming Desk. This gaming desk will satisfy your needs for a multi-monitor gaming setup with its ergonomic and sleek design. For a better functionality, we have added a holder for your headphones and two sizes cup holders. Take your gaming to the next level to full potential with Techni Sport Stryker Gaming Desk!

Love it! There’s plenty of room for all the stuff you need including a 32 inch tv but it’s not a one person job to make it yourself. Other than that really excellent quality worth to buy.

The chair and desk are both well built and a great buy. My only complaint is that you only ship through Fed Ex. Would've liked some other shipping options to get them quicker.

Reach your ultimate gaming potential with the Warrior Gaming Desk. As an l shape gaming desk, The Warrior will satisfy your needs for a multi-monitor and multi PC gaming setup by providing all the surface space you'll need. For better functionality, we have added a holder for your headphones and double-sized cup holders. Take your gaming to the next level with TS Warrior's l-shaped ergonomic and sleek design.

This desk fit everything I was looking for in a desk. It has plenty of space, metal frame, and a flat work surface. The earphone hangers were a plus and while I wasn't explicitly looking for the shelves, I was pleased to see it came with them.

The desk came well packaged and as I pulled everything out I had no doubt that everything would be in good condition. Assembly was simple enough and everything felt solid as I put it together. Most importantly, the two halves of the desk line up perfectly so there isn't a massive gap from rounded edges or one surface being higher than the other (a major concern with any desk that comes in pieces). I was pleasantly surprised by how even they were. I also chose to put the two smaller shelves side by side and they also aligned brilliantly.

I wasn't a huge fan of the carbon fiber design to begin with - I would have preferred a matte black surface, but it isn't annoying and doesn't jump out at you too much, so I don't really have a problem with it in the end.

My only problem with the desk is with the way the shelves attach to the main portion of the desk. I think the design is simple and effective, but the protective pieces that go inside the shelf stands have sharp edges that scratched my desk surface during assembly. If I leave the desk in this configuration, it's fine and nobody will ever see it, but if I decide I want to move the shelves later on the scratches to the carbon fiber surface will be pretty bad. For this I've removed one star.

Knowing what I know now, I'd buy this desk again. I would think twice during assembly on if the shelves are worth installing though as I'm stuck with this configuration or with a scratched work surface.

L
L.W.
One of the best gaming chairs I’ve had.

The quality and comfort of this chair is second to none. Shipping was fast, great support team I also bought the warrior desk which is equally as awesome. Technisport is on they’re game when it comes to making the best.

The desk is awesome and extremely spacious. Few problems were some of the holes still had the welding on it so I had to force the legs through, the extra shelves that come with it are a pain to put because the metal safe guard doesn’t stay long enough for you to tighten them to the desk.

Easiest piece of furniture I have ever assembled. Everything worked just as it is supposed to and the desk looks beautiful. I assembled it by myself but the lifting of the desk after it is put together would have been easier with another person. Overall desk is beautiful, easy to assemble, shipped on time, and very pleased with my order.

This desk is well built, the carbon look on the top is so clean and slick. Fits more on surface than it looks. I have 3x 32inch curved monitors And still have half a desk for other items. Height is perfect for gaming chair. Super happy with this bad boy. Others mentioned it was easily scratched moving the stands, but I moved them a few times with no issue. Like with any desk surface, you just have to be cautious when scrapping metal on it...Only complaint was shipping snafu which delayed the second half of the desk delivery, but that was FedEx not knowing where it was at for 3 days. Techni support shipped a replacement before waiting on FedEx to find it. That extra effort on Techni’s part matters. Most companies wait until package confirmed lost. My husband loves their chairs, which is why I rolled the dice on this desk. 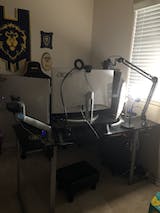 Don't lose your game with our Aria sit-to-stand gaming desk. Make sure you are gaming healthy while stretching and taking a break from sitting between the long gaming sessions. Level up your gaming expertise with an improved focus and uplifted mood. Your concentration and creativity are essential to your success, and they will be improved by the flexibility only a standing desk can deliver. With a power height adjusting button, the Aria elevating desk rises up or down to one of the four different height positions.

This desk it's truly a game changer! I love it so much!!! It's so smooth, spacey, beautiful and so easy to put together - they send you really clear instructions. I can't wait for them to be back in stock to purchase another one for my husband.

Honestly the desk is beautiful, The packaging was beautiful, and it was really easy to put together! If you’re looking for a standing desk I definitely think the Aria should definitely be a top choice!

Plus the buttons that make it easy to save your standing/sitting height is so great!

I love this desk. I’m an avid gamer with a technisport chair, but I also work from home. So having the ability to stand while working is amazing. Putting together was not difficult at all and this desk is beautiful. I’m running three monitors on a triple stand, a technisport extended mouse pad, and there is still room! I absolutely love it.


OUT OF STOCK - ETA TO SHIP BY WEEK OF AUGUST 10th

Designed with functionality, style, and comfort in mind, the Envidia game desk guarantees all the ample desktop space one needs. This multifunctional gaming table comes in an l-shape style with a sleek frosted glass top and a keyboard tray. It will satisfy even the pickiest gamer, as it allows left or right-hand side assembling flexibility. If a large gaming setup is what you are going for, the Envidia PC gamer desk is your best bet! With its ample space, this desk is the perfect finish to your gaming room.

Hands down the best desk I have ever put together. as for put together furniture many are clueless with difficult instructions and parts not labeled correctly. the packaging was perfect no broken parts. my only complaint is the drawings of the parts to be assembled should be bigger to scale. parts bags were easy to find and use. I am very pleased with this desk and I would highly recommend it.

B
B.
Fantastic looking desk!

Took like 4 hours to setup and move things around. Online instructions were really thorough and the hardest part was screwing in the glass as you had to loosely screw in each screw. Only complaint is the keyboard rest is not completely flat and leveled out. Also the glass seems a little misaligned but is hardly noticeable and doesn't completely effect putting the desk together.

The Chair looks great and is comfy... great quality and fast shipment

Thia this is absolutly amazing. Im able to have a clean set up now and I can access everything within arms reach! It was very easy to assemble together.