The TS Comfort+ Series is your best bet if you are hunting for the most comfortable chair on the market. The TS 61 Purple and black gaming seat will provide you with maximum comfort and a sleek ergonomic design with a build-in full-back lumbar support. Inspired by our passion for improving every aspect of your gaming experience, this chair series is regarded as the best choice for comfortably prolonging your gaming hours. Take your gaming setup top the next level while supporting a great cause!

This chair is spacious and comfortable. It was easy to assemble and came with extra screws just in case you needed them. It great for working it gaming for long periods of time. My girlfriend loves her new chair for gaming and streaming and I will definitely be purchasing from TechniSport in the future.

First thing, this is a very comfortable chair and I've only been using it for a couple hours and my lower backpain is going away. The build quality is top notch, the materials feel sturdy. It was easy to put together. If you're looking for a chair this is the one.

I bought the Purple Comfort Gaming Chair as a gift for my partner. He's about 6ft tall and slender. He spends a LOT of time in front of his computer, for work and entertainment purposes. His last chair was purchased from Staples and lasted about 10 years before it started to fall apart. This new chair was a birthday/holiday gift and he says it is perfect for him. He has used the chair for over a month now. It looks great in his office and it's held up well so far. The recipient has repeatedly stated that he likes the adjustable pillow, the firm yet pliable seat, and the purple and black colors.

I will be transparent, this is my first gaming chair. It's replacing a folding chair I've been using for a long time and I decided to bite the bullet. That being said, I also have a nice Herman-Miller task chair at work, and I've used a fair number of other styles of task chairs as well (mesh back, padded back, etc).

The upholstery on this chair is fantastic - however it will warm up after continued use (not uncomfy). My office in my house is quite cold in my basement so this is a plus for me, but your mileage will vary. Some task chairs have nice padding, but do not have as premium a feel as this does (maybe that's a gaming chair thing?) - the back is especially comfy.

I've seen other reviews comment about how you can't sit on the front edge or it will tip and that's very true - this chair isn't designed to be sat in like that (only chairs I've seen where you're supposed to sit on the edge are concert posture chairs for band/choir). It's designed to utilize the back of the chair all the way down your back (and optionally recline, to what feels like laying down) which is amazing.

I think the pillow is a gimmick, but it's comfy when I've thrown my hands up in frustration at something while working and needed to think for a second :)

Now let's cover the two 'not so great' aspects I've run into:

1. The arm rests. My gripe with the arm rests is that they're touchy. The spring-loaded mechanism to hold them in place is light-weight so if I'm getting in/out of the chair the arm rests will usually rotate or slide front/back (sometimes both). The height adjustment is fine and won't move unless you pull the trigger mechanism. Other things to note, the description claims 3D arms, but I'd put a 'hardly' somewhere in there. You have height and front to back, but as far as rotation you have three options: ~20 degrees in, straight ahead, or 20 degrees out. Now, it's nice I have the option to rotate so I won't knock the feature but I wanted to let people know what they're getting.

2. I had a quality issue with my chair - one of the screws was missing on the spring loaded arm that holds up the back of the chair. I did not notice this until I had already attached the back of my chair and found that the back basically rotated until it touched the floor (oops). That being said... TechniSport was smart. Not only have they standardized their chairs on 2 types of screw (majority of one type), they provide extras - I was able to resolve this issue on my own with the supplies provided. For those wondering about the warranty, it is a 'ship back at customer expense' style warranty - so I am very happy I didn't have to ship this back because a screw was missing (there is a possibility they could have shipped me a screw, but now we're talking speculation). Just disappointed that this defect somehow made it through quality checks (the hinge could be checked by applying minimal force, or you know... just look for two screws before putting the cover on). Once repaired, this chair has been fantastic (except for the meh wrist rests). I brought this up to customer service just to let them know and they've been receptive/understanding which is a great plus.

All-in-all great chair. I'd probably buy another one, but I'd be a little more critical of the wrist rests next time. 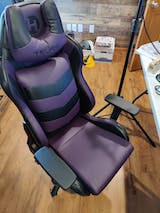 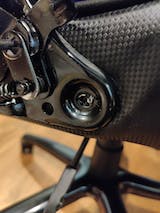